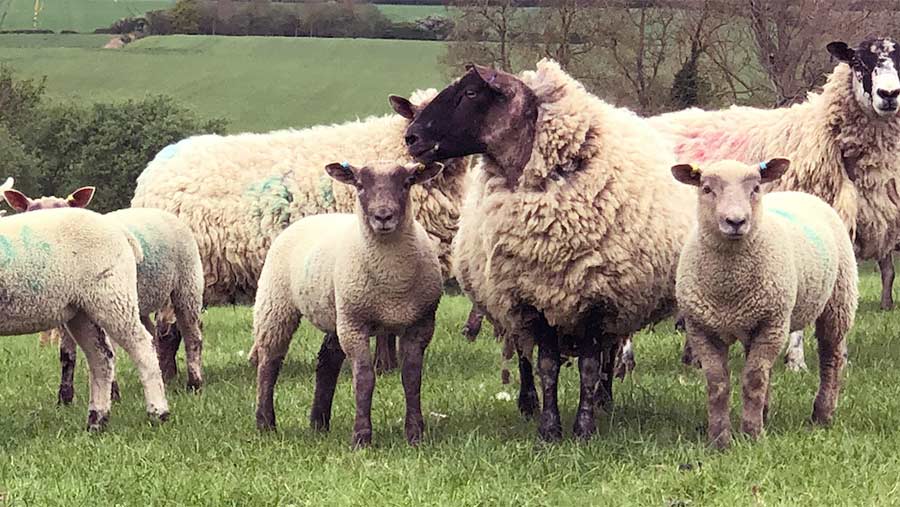 How a Lincs Sheep Farm Expanded and Diversified Its Income

A progressive approach to herd health, combined with hard work and savvy marketing, has allowed a Lincolnshire couple to expand their sheep business and income.

Chris and Louise Elkington of Gelston, near Grantham, lead a herd of 450 after starting with just two companion sheep 10 years ago.

They branched out with a lamb catering business, Gelston Lamb, which they started in 2014 and selling direct to the consumer.

Their herd of mostly Lleyns and Roussin Mules also helps local farmers, with the sheep providing organic matter and a break in crop rotation.

The Lleyns are wintered on 20 ha of turnips on a farm while the mestizos graze meadows on two other arable units for low / free rents.

The couple met through Young Farmers in 2008 and in 2010 they bought 30 gimmer Mule lambs from the north of England from the Hawes Sale for Â£ 80 per head, to add them to a small herd of Hobbies.

Another 30 lambs were purchased the following year and the herd slowly grew.

In 2016, they bought 200 Lleyn ewes from a breeder in Rutland when Ms Elkington’s father passed away, allowing them to lease 45 ha of the family’s arable farm.

Since then at least 50 lambs have been detained each year and around 50 Lleyn-cross Aberfields have been purchased from a friend. Last year the herd was closed and they will keep replacements to reach 650 head.

The 45 ha pasture block is used for lambing and summer grazing and is in its third year of a mid-level countryside stewardship program, which has funded most of the fencing (4.60 Â£ / m), gates and hydraulic infrastructure in a grassland reversion program.

The sheep are reared at the rate of four ewes / acre (10 ewes / ha) all summer, then wintered on 28 ha of land on three neighboring arable units behind electric fences.

The 450 sheep are divided into a herd of 300 Lleyns and Aberfields lambing outdoors and a mixed herd of 150 Roussin Mules and North of England Mules lambing indoors.

Two herds are used in an attempt to reach the early deadweight market and also produce lambs all summer long for catering and outdoor events.

Mule, Lleyn and Roussin-cross Mules form the maternal base of the herd, with Roussin and Charollais terminal sires used on both herds and Lleyns used to rear replacements on the outdoor lamb herd.

All tups are purchased from performance registered and trade oriented systems. Roussin provides hybrid vigor and a versatile cross capable of UL grade lambs that are lively from birth.

Last year, the Elkingtons sold 100 whole lambs to freezers, 60 lambs through a catering company and 300 deadweight lambs, with 90 ewes kept.

The lambs are slaughtered at a site 20 minutes from the farm, although a small home butchery is planned, which would allow the Elkingtons to target the pub business and sell more lambs in freezer boxes.

The flavor and quality of the burgers is achieved by chopping whole lambs, resulting in a higher price than selling a premium lamb for Â£ 80, although Mr Elkington points out that this is not just profit.

â€œKitchen, butcher, labor, brioche, VAT and event pitch are all payable,â€ he explains.

Mr. Elkington still does a lot of work off the farm and harvesting. â€œSo while this is a good diversification, the Â£ 4 per hamburger certainly isn’t all profitable. “

A mint burger and a Moroccan burger are currently on offer, with a high-end burger with relish currently in the works. Lamb sausages are also sold at events.

Dead weight Most lambs go to Dunbia on a specification of 18-22kg, with lambs shot from 39kg liveweight.

Advice on the direct sale of lamb