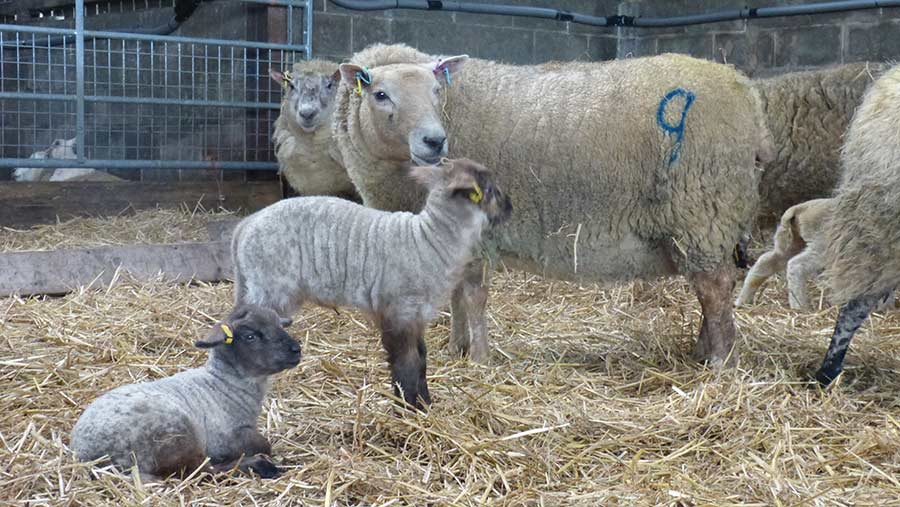 A herd of self-replacing terminal bulls is now aiming for 1000 kg liveweight / ha after increasing yield by 27% in three years.

History of the farm

The herd has evolved several times since Jayne Brown restocked the family farm in 2006 and purchased 140 Broken Mouth Swaledales and a few Bluefaced Leicester tups.

She has experimented with breeding Swaledale, Cheviot, Lonk, Blackface, Derbyshire Gritstone and Lleyn sheep with Bluefaced Leicester rams. A suckling herd of 35 heads has been created, but the farm has been exclusively sheep since 2018.

Gimmer lamb replacements have been selected from terminal bull lambs from various Mule crosses and some Lleyns have been tried. The herd is now mainly at least three-quarters continental.

Now a breeder with her partner Paul Richardson and with the help of her daughter Jayne, Ms. Brown raises replacement lambs and premium lambs with terminal sires.

A teaser is used to lamb the herd in three blocks of two cycles. Due to the limited space in the sheds, the lambs from the main herd from mid-February, the short lamb from the beginning of March and the pig lamb from the end of March.

Taking blood samples and checking forage quality before lambing gave the farm the confidence to rely more on locally grown forage and reduced concentrate feeding by 70% at the end of gestation. mature ewes for the 2021 lambing.

Sheep feed (which includes all the nutrients purchased – minerals, lamb replacement milk, sheep concentrates, creep and Himalayan rock salt) cost Â£ 19.21 per lamb sold in 2017, but fell at Â£ 12.95 per lamb sold in 2020. This included milk replacer for 70 pet lambs.

Much of the cost was saved by producing 10.5-11 Metabolizable Energy (ME) silages, cutting the grass before the seed head started to come out completely.

The fields are closed from the end of April after the first pasture. The silage in large bales is then taken in June and July after five weeks of growth.

To catch the grass in the right place, the farm has its own silage equipment, rather than relying on contractors.

They have also reseeded about 48 ha of the farm’s 62 ha under the leadership of Ms Brown’s father, Ray, since 2011, with the rest to be done this year.

The soil is seeded with Italian ryegrass for about three years, followed by a longer expanse of perennial ryegrass, timothy, and clover.

More effort will be put into rotating grazing and subdividing pastures to maximize grass use. The sheds will allow more flexibility and will allow them to rest the grass in winter.

Running an all-sheep farm will present a challenge when it comes to parasite control, but the farm will continue to use clean pastures, rotations, and follow the principles of Sustainable Parasite Control in Sheep (Scops) to manage this.

â€œThe farm increased the number of kilos sold per hectare and we also increased the value of each kilo with carcass grades,â€ says Brown.

â€œThis system suits our personalities. We practically live in the lambing shed anyway, so we might as well maximize production if we’re that practical.