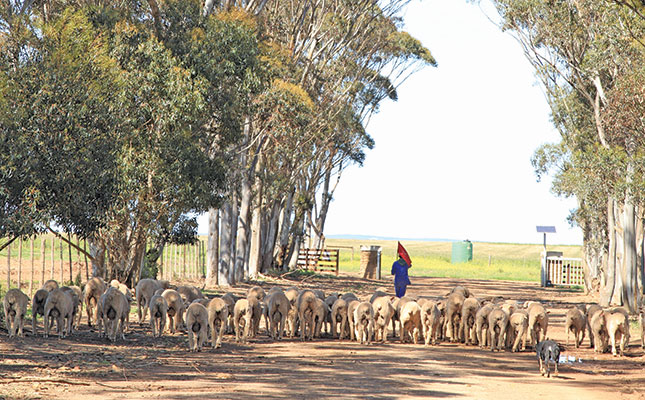 Sheep production has become a numbers game, with the profitability of a farm largely depending on the farmer’s ability to produce large numbers of sheep at low cost. Farm manager Dirk Liebenberg spoke to Glenneis Kriel about how he achieves this goal.

At Pienaarsrivier, a grain and sheep farm near Riversdale in the Southern Cape, farm owner Kobus Horne and his sheep production manager, Dirk Liebenberg, have dramatically improved production efficiency and reduced costs through their use of technology and a carefully planned management system.

One of the most outstanding features of the farm is the careful way in which the production facilities have been positioned and structured for the comfort of the animals and for ease of movement and management.

The handling workshop, the shearing shed, the feedlot, the lambing shed, the flour mill and the camps for rams, pregnant ewes and ewes with lambs are all located within a radius of a few hundred meters.

Computerized weighing system
At the handling facility, which is shaped like a wagon wheel, Liebenberg and his team use a computerized scale that sorts animals into one of five pens based on pre-programmed instructions.

The animals are sorted mainly by their weight and the ewes are separated according to the number of lambs they carry. The computer identifies the animals by reading their radio frequency identity tags, which are attached to their ears when they are two days old.

“While it took us at least six hours to weigh and sort 1,200 sheep, we can now do it in less than two hours,” says Liebenberg.

The technology also makes better use of labor and allows Liebenberg and his team to more carefully monitor the growth of feedlot animals.

“Animals in the feedlot are weighed weekly and sold when they weigh 48 kg. We also sell the ones that don’t gain weight anymore, as we can’t afford to keep the freeloaders. »

Management
The farm has three production groups, each comprising 1,200 Merino ewes. The ewes lamb every nine months, in January, October, April or July depending on the production cycle of the group.

Each group is divided into four sub-groups, each of 300 ewes, to spread the lambing season over the month. The goal, Liebenberg says, is to get new lambs every two weeks, spread over six weeks.

The farm boasts a weaning percentage of 140% per season, but having four lambing cycles in three years pushes the weaning percentage to an impressive 180% per year. This translates to 1,800 lambs for every 1,000 ewes that breed each year, compared to 1,400 if there was only one lambing season per year.

Ewes are synchronized for breeding when their lambs are weaned at 100 days, with first-time buyers being included in the group as soon as they reach 48 kg. The best performing animals on the farm, constituting one of the four subgroups, are superovulated for laparoscopic insemination with the semen of two rams purchased for this purpose.

“The idea with the upper sub-group is to improve the genetic stock of the farm. The selection of rams to use on the group will therefore be based on specific traits that we might want to improve,” says Liebenberg.

The other three sub-groups are placed with teaser rams before being served by the fertile rams.

A ratio of one ram to five ewes is used and they are herded together for only three days. Two weeks later, the ewes are placed for 17 days with Dormer rams, which care for ewes that failed to conceive on the first breeding attempt.

The ewes are scanned 35 days later to determine the number of lambs they are carrying and, based on the size of the fetuses, whether they are Dormer hybrids. Ewes that are not yet lambs are sold the next day.

“The system cannot accommodate sheep that do not conceive because we are working with too many sheep. We produce around 700 ewes each breeding cycle, of which 200 will need to be culled,” Liebenberg explains.

The 120 rams used for breeding undergo fertility testing every six months to ensure they are performing well. Most breeding ewes and rams are kept until they are five years old, after which they are sold, regardless of their production performance.

lambing house
Three weeks before the start of the lambing season, the ewes are sorted according to the number of lambs they are carrying.

They are then kept in large camps close to the lambing facility and fed ad lib so that they are well able to care for their lambs and recover quickly thereafter. Taking the ewes out of the veld and feeding them pellets also prepares them for the feed they will receive in the lambing pens.

They are moved to pens in the lambing house the day before they lamb.

“Ewes carrying multiples generally lamb earlier than those carrying singletons, with lambing time varying from 145 to 150 days after being bred,” says Liebenberg.

Birth data, such as date of birth and number of lambs, is recorded on a white card attached to each lambing pen, for incorporation into the rest of the farm’s production records.

Each lamb receives an energy booster within 12 hours of birth and its navel is treated with iodine to prevent infection. Two days later, RFID tags are attached to their ears and they receive another energy booster.

Singletons (along with their ewes) are removed from the pens at four days of age. Liebenberg and his team carefully monitor the growth of the twins and higher multiples before releasing them to ensure they are strong enough to face the outdoors.

The lambing facility is thoroughly cleaned between entries to prevent buildup of pests and disease.

In addition, bedding, consisting of straw, shavings and sheep manure, is collected after each batch of animals leave the pen and added to the materials collected at the feedlot to make compost. This is spread over the farm’s wheat land to improve soil health and structure before planting.

Larger camps
Once they leave the facility, the ewes and their lambs are moved to a series of camps of increasing size at three-day intervals to ensure strong bonding and to identify potential problems.

During the first stage, the ewes and their lambs are housed in small camps, with five ewes plus their lambs per camp, next to the lambing barn.

They are then merged into groups of 10 in slightly larger camps behind the smaller camps and then into even larger camps at a stocking rate of 20 ewes plus lambs per camp. Finally, they are moved to the larger camps, each containing 40 ewes and their lambs.

Creeping feeding is introduced at the last camp. Although lambs consume little of it at first, it helps them get used to pellets and eases the transition from milk to solids when they are weaned, according to Liebenberg.

When the lambs are 21 days old, they are moved with their ewes to pasture or veld on the rest of the farm. At 45 days, the lambs are tattooed and their tails docked to avoid problems with blow flies. They are also dewormed and at the same time receive a multivitamin product.

At 70 days, they receive a vaccine against the main diseases prevalent in the region, antiparasitic drugs and a multivitamin and mineral supplement. Ram lambs also receive a product that stimulates their appetite, helping to accelerate growth.
When they are 100 days old, the lambs are dosed again, inoculated and given multivitamins and minerals.

Selection
Merino lambs are weaned at 100 days of age and hybrids at 75 years old, as the vigor of hybrids results in accelerated growth. Ram lambs and hybrid lambs are then transported to the feedlot, near the sorting camp.

An expert contractor then helps to physically assess the build and fleece quality of the ram lambs produced by laparoscopic insemination. The best rams are kept for the farm and the rest are sold to other farmers.

Liebenberg says they plan to select only polled rams in the future to avoid accidental injury.

The remaining animals are finished in the feedlot. Here they are fed ad libitum, with the troughs automatically filled under the control of an intelligent auger system that detects the amount of feed remaining. They are sold once they reach 48 kg, with the first animals usually ready for sale within two weeks.

mowing
The sheep are sheared twice a year, in February and August. “The farm is too busy to mow at other times because we have to plant in April and harvest from October,” says Liebenberg.

Shearing accounts for about 40% of sheep income and the sale of lambs the rest.

The aim is to produce fiber with a diameter of 18 to 20 microns, but this must be balanced with the volumes of fleece produced.

“We are aiming for at least 5 to 6 kg of wool per sheep, including ewes and lambs,” says Liebenberg.

Liebenberg explains that Pienaarsrivier’s intensive sheep management system, which requires considerable planning and management, was not thought up overnight, but developed systematically from lessons learned over the years.

“Having to switch to a system like ours would be overwhelming if you had to change everything in a short time, but we have refined our system over time to make it work for us. Today, it’s built into the way we do things, almost like second nature.

2021-01-29
Previous Post: The cutest breed of sheep to play on show
Next Post: Australian white sheep breed is growing in popularity, surprising farmer who bought it by mistake