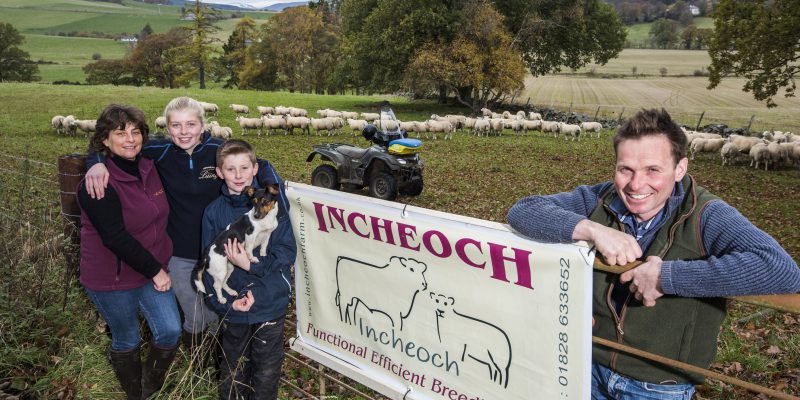 The award is managed by AgriScot and Quality Meat Scotland (QMS) and sponsored by Thorntons Solicitors.

Incheoch, near Alyth, is run by husband and wife team Neil and Debbie McGowan in partnership with Neil’s mother, Judy, Father Finlay and sister Clare.

Incheoch is a 485 ha mountain farm at the foot of Glenisla, which operates 1,100 Lleyn ewes on a sheep system with low capital and labor costs, as well as a suckler flock.

The McGowans are dedicated to improving the genetics of their herd and improving commercially relevant traits, especially maternal characteristics.

The basis of the sheep business is the production of premium lambs, however, they have been selling grass-fed Lleyn and Texel rams registered at a farm sale for 11 years.

Top quality lambs are sold at Woodheads, but the McGowans also work with a local slaughterhouse and butcher and sell 30-40 of their lambs direct to the public each year in bespoke retail packaging.

The aim of the AgriScot Scottish Sheep Farm of the Year award is to showcase the excellence of sheep production in Scotland and to raise the profile of the dedication of the Scottish sheep farmers who produce the IGP Scottish Lamb.

Neil McGowan of Incheoch Farm was delighted with the news.

He said: “To be announced as Agriscot Scottish Sheep Farmer of the Year is a great recognition of the effort that everyone involved in Incheoch is putting into what all Scottish sheep farmers are trying to do – producing a great, responsive product. to well-being and the environment, in a company that offers an attractive lifestyle for the next generation.

As part of their award, the McGowans received a £ 500 check as well as a £ 250 voucher to celebrate their success at a Scotch Beef Club restaurant. Members of the club, run by QMS, are committed to serving top quality IGP Scottish Beef.

Fergus Ewing, Cabinet Secretary to the Rural Minister for Rural Economy, said: “I would like to offer my warmest congratulations to the McGowans on Incheoch being named Scottish Sheep Farm of the Year 2018.

They are excellent ambassadors for our Scottish sheep sector and have shown how technology can help produce an efficient and robust breeding stock while improving it commercially.

“I wish them every success for the future.”

He also congratulated the finalist Bowhill Farming in Selkirk, run by Sion Williams and his team for their commitment to producing Scottish lamb.

Charley Walker, of Barnside Farm, one of this year’s reviewers and recipient of the 2017 award, said it was incredibly difficult to decide who should receive the award this year as both companies excel at what they do. .

He said: “Incheoch and Bowhill are very different farms, but both share exceptional technical performance and a great passion and understanding of the sheep industry.

“Both have made and continue to make great strides in breeding and have a great understanding of their market. ”

His fellow evaluator and AgriScot board member, Hamish Dykes, added: “While Sion and his team should be rightly proud of what they have achieved, we have been incredibly impressed with the foresight and McGowan’s courage to follow their chosen path at such an early stage.

“Long before any of us knew what a Lleyn really was, Neil and Debbie already had a herd and were preparing to start their farm ram sale.”

During the farm visits, the judges looked for evidence of a high level of technical and financial performance, the adoption of new ideas to improve efficiency and profitability, a high level of health and well-being and a keen eye on the market for the end product.

The judges also sought to gauge the passion and enthusiasm of the farmer, family, and staff, where applicable, to efficiently produce high quality animals.