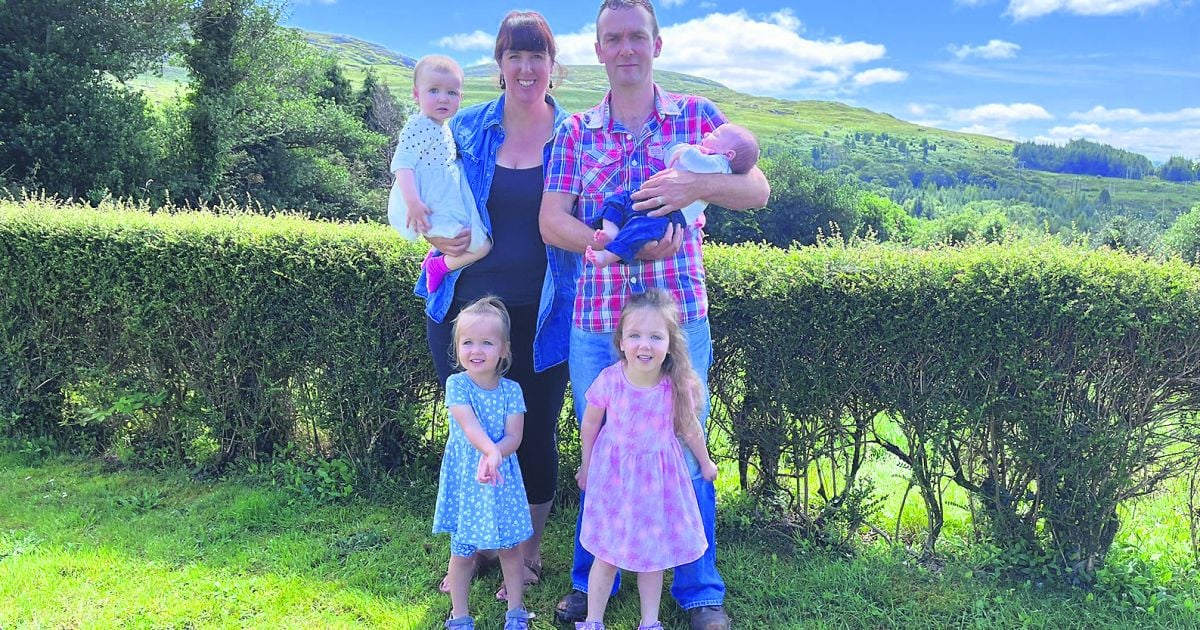 TEAGASC: August is a critical time for O’Riordan Sheep Farm in Borlin

Denis and Esther O’Riordan’s farm is one of 90 National Teagasc SignPost Farms, all of which have a clear focus on reducing carbon emissions in agriculture, while improving water quality, biodiversity and by increasing the profit margins of agriculture.

DENIS and Esther farm in the beautiful Borlin Valley, 12 km north of Bantry.

They have four young children, Abbie (3), Roisin (2), Orlaith (1) and baby Eamon. Denis’ uncle, Donie, who is in his eightieth year and still active on the farm, previously owned the operation.

The 228 hectare farm extends to the peaks of the Caha Mountains which border Kerry to the north, reaching altitudes of around 650 metres.

About 12 years ago, Denis bought another eight hectares of plain near the Coosane gap, to expand his farm in Borlin.

Denis and Esther, participants in the Teagasc Signpost program, are part of the Hill Sheep Farmer category.

The sucklers supplement the sheep business by grazing the lower hill slopes to control the purple heath grass which the sheep will not graze very well from May to September.

In July, round bale silage for winter forage was cut in the lowlands. It was wilted and withered before baling and triple wrapped to ensure that no fungal mold would grow on the bales.

The land was closed at the end of May when the ewes and lambs were moved up the hill and fertilized with protected urea in accordance with the farm’s nutrient management plan.

Denis believes that protected urea is more cost effective than CAN or compounds because it is cheaper per unit of nitrogen.

It also helps to reduce gaseous emissions. Shearing of all sheep was also completed in July. The shear occurred a little later than usual this year as May and June were cooler than normal and blow flies were at low risk during this time.

Shearing is a necessary cost on the system because the value of wool is less than the cost of shearing.

The critical job on a sheep farm for the month of August is weaning and drafting lambs. A total of 397 lambs have been successfully raised so far in 2022. From then on, 80 Scotch blackface lambs will be kept as replacement ewes.

Thus, 317 lambs will be for sale now throughout the fall.

The lambs will be sold as stores in local markets. Meal feeding will be minimal due to increased costs, but very small lambs will be trained to eat meals to make them more marketable later.

Ewes and lambs are dipped or treated with pour-on to prevent blow flies. On this farm, worm dosage is minimized by rotational grazing and the use of large hilly areas to avoid resistance issues and reduce costs. Clear dewormers are used by Denis if necessary, based on faecal samples from lambs only.

After shearing, all breeding ewes are checked for defects in the teeth, teats, feet or cases of previous prolapse. Ewes found with these defects are marked for culling and put on grass to gain weight for a few weeks to ensure a good cull price.

Suckler cows and calves will be weighed in August. Meals are fed to calves for one month before weaning and two weeks after to conform to the Beep pattern.

Weaned bulls and heifers will be separated to prevent heifers from calving at a young age. All heifers sold for weaning will receive a prostaglandin injection to ensure they are not pregnant.

Denis and Esther are looking forward to the new Cap 2023-2027 program to ensure a good family farm income over the next few years. They have a particular interest in the new Acres diet and the organic diet.

• Michael Connolly is a Cattle and Sheep Business and Technology Advisor based at Teagasc’s office in Skibbereen. He is also available at the Bantry Advisory Clinic, 9am to 11am, several days of the week.

2022-08-20
Previous Post: This New Columbus-area Winery Is Built On A Historic Sheep Farm – 614NOW
Next Post: The 80 MW solar project in Colorado will remain a sheep farm