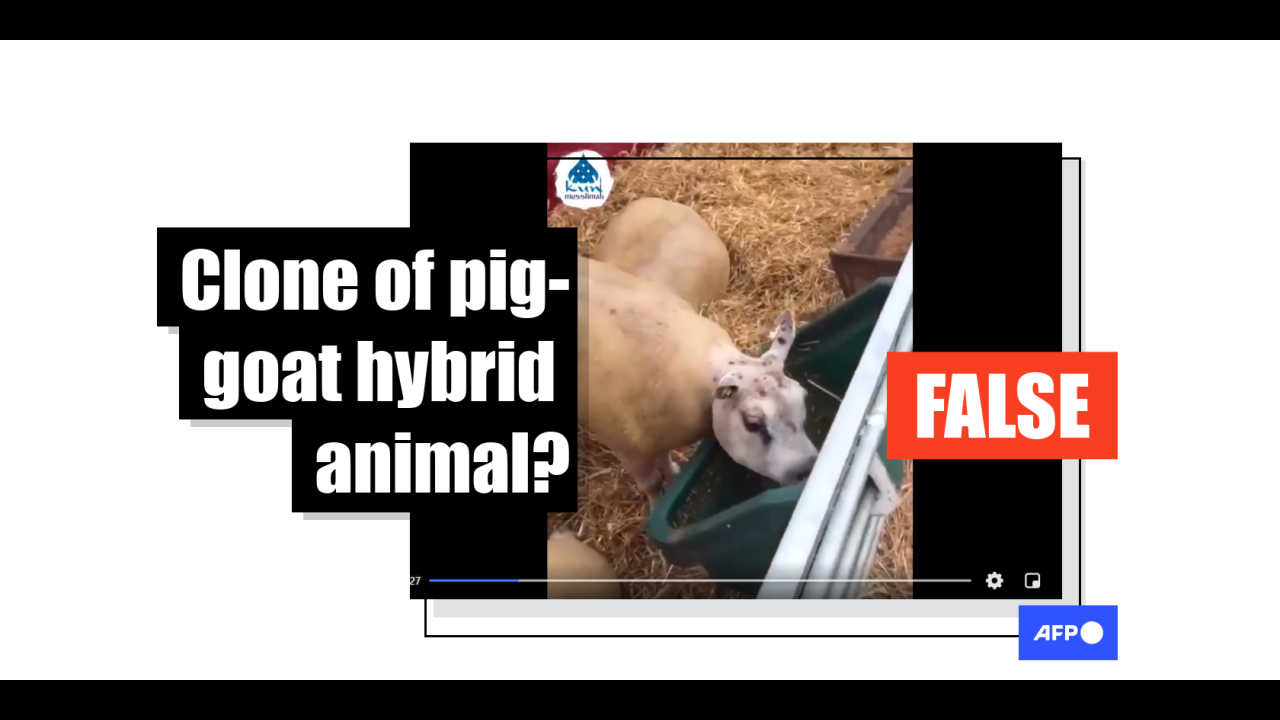 The video shows a breed of double muscled sheep from Belgium

A video has been viewed thousands of times in several Facebook and YouTube posts, alongside a claim that it shows a clone of a goat-pig hybrid animal called Khanzarof. The claim is false. The video actually shows the Beltex sheep, a breed originally from Belgium.

The message in Indonesian translates into English as: “The result of cloning

Screenshot of a misleading message, taken on April 11, 2021

The same video alongside similar claims has been viewed over 4,800 times after appearing on Facebook here, here, here and here; as well as on YouTube here and here.

The video has been viewed over 8,400 times with a similar claim in English that it shows a hybrid pig-sheep animal, like here, here and here.

However, the claim is false.

Two banners can be seen within the first three seconds of the deceptive video which reads: “Jewitt Beltex” and “Beltex Crackers Female Sale on December 1, 2017”.

Keyword searches found a video showing sheep that look like those in the deceptive clip on the Jewitt & Sunnybank Pedigree Livestock Facebook page here, dated July 11, 2020.

The message reads in part: “Beltex Shearling Gimmers For Sale

Beltex is a breed of sheep from Belgium that was originally developed under the name Belgian Texel, selecting and reproducing traits found in double muscled sheep.

Below is a screenshot comparison between the clip of the misleading message (left) and the video from Jewitt & Sunnybank Pedigree Livestock (right):

Harrison & Hetherington, a UK based cattle auctioneer, published a 52 page magazine for the Beltex Cracker Women Sale held on December 1, 2017 in Carlisle City, England. The information seen in the magazine matches the banners seen in the misleading clip.

The Indonesian Ulema Council (MUI) has published this article, written by Henny Nuraini, lecturer at the Agricultural University of Bogor in Indonesia, in June 2020, demystify the allegation.

â€œUpon further investigation, it appears that the animals [in the misleading video] are Beltex sheep from Belgium, â€she wrote. â€œThis type of sheep is the result of a cross between local Belgian sheep and Texel sheep. This sheep was developed by a Belgian breeder who was assisted by Professor Roger Hanset of the University of LiÃ¨ge, a researcher who also developed Belgian blue cattle.

AFP previously released a fact-checking report that a video that allegedly shows a pig-cow cross is actually a video of a Belgian blue bull.

Further debunking of false claims regarding a pig-cow cross breed can be read here and a pig-sheep cross breed here.